What is the Electoral College and is it Outdated?   by Suzanne Cook Catlin 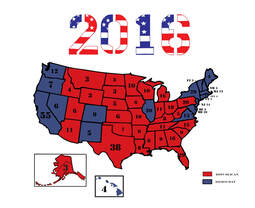 The Electoral College drew a lot of attention in December 2016 when the electors voted as their state’s directed for the next President of the United States. Hillary Clinton won the popular vote, but Donald Trump won the Electoral College and the Presidency.

To understand the college, it’s important to understand the difference between a democracy and Constitutional republic. In a democracy, representatives are chosen by direct popular vote. Our founding fathers saw the potential danger of this system. They were concerned about tyranny by the majority, when 51% represents a majority. What about the other 49%? How could the minority be assured a voice? Or are they simply going to be overrun by an ambitious majority? How could they preserve liberty and build an effective government that represented the voices of both the majority and the minority?

If we were to amend the Constitution to change the way a president is selected to popular vote, it would change the entire dynamic of the way we are governed. Popular vote would mean that just a few highly populated cities would choose a president, to the exclusion of everyone else. If the same party elected the President and both the Senate and House of Representatives, then we are vulnerable to tyranny because they could ignore the needs of the minority. The minority would have no voice. The needs of 49% the people could be completely ignored.

As a Constitutional republic, we elect people at the local level to be our representatives in the seats of government, be it Local, State or Federal government. By electing people locally, they are directly accountable to those who elect them. A duly elected representative joins other representatives and they work together to assure all voices are heard.

This is the premise of the Electoral College. Each State has representatives, called electors. The electors are chosen by the popular vote of that State. The number of legislators and senators in each State determines the number of electors they have.

When you’re voting for president, you are actually voting for a slate of Electors that represent the candidate you’re voting for. If you combine all State’s electors, there are a total of 538, corresponding to the 435 representatives and 100 senators, plus the three electors for the District of Columbia, as provided by the 23rd  Amendment to the US Constitution. A candidate must receive a minimum of 270, the majority of elector votes needed, to win the presidency.

Here’s what tyranny would look like: If we were to have direct popular vote, only a few states would determine who’s president. But worse, the party that controls the Presidency, the Senate and Congress, would have an unhealthy control of the government. No longer would they be forced to work together out of necessity. Instead they could cater to the needs of the people who elected them. Conceivably, tax funds from minority states could be more easily funneled into majority held states. This would be tyranny.

Our founders put a lot of thought into this process. The process is straightforward and quite detailed and you can read about it in Article II Section 1 of the US Constitution. The Electoral College is a safeguard against tyranny by a majority and assures that all voices are heard, even
voices in the minority party.

​Why the National Popular Vote is a Really BAD idea. The Great Lie You Need to Know About 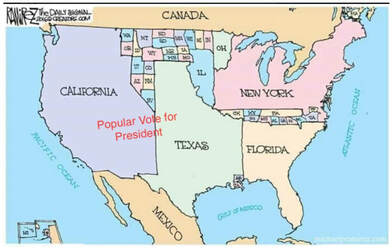 What is the National Popular Vote Agreement?
The NPV agreement calls for each member state to hold presidential elections, as we do now, and to pledge all their electoral votes to the winner of the national popular vote.

How does that differ than the current practice?
The US Constitution calls for each state to elect a slate of electors that are pledged to vote for the winner of the statewide presidential election when the Electoral College meets in December after the election. This guarantees that the people of each state have a voice in electing the president and vice president.

What would be the effect of adopting popular vote?
The net effect of popular vote would mean that only a few cities in certain states would determine the outcome of a presidential election because they have very large populations (see the map). All other votes would be worthless. One party would control the elections and the country. They would be under no obligation to spend tax money, or do anything, to benefit the smaller states.

What would happen to the Electoral College?
The Electoral College would be a meaningless process since the results would be predetermined by the outcome of the popular vote. It does not require all states to agree, unlike a Constitutional Amendment that requires 3/4 of the states to pass it.

How is the change to popular vote being made?
Backers have been targeting state legislatures to pass it. So far 14 states, and the District of Columbia, have done so, committing 189 electors. That’s only 81 electoral votes away from passing. Backers need 270 of 538 total votes to capture the presidency. However, many states have refused to pass it, including Arizona. In Arizona, the backers are now using the initiative process and going directly to the voters. They are well funded, using lies and propaganda to manipulate people.

Isn’t that better to have the voters vote on it?
It would be, except, the backers know that the vast majority of people don’t understand the Electoral College. It was set up by our founders to prevent tyranny. It gives a voice to voters in each state, assuring the greatest participation in Presidential elections. President Trump does NOT support national popular vote.

After the Constitutional Convention of 1787 ended, Benjamin Franklin was asked if we had a republic or a monarchy?  Franklin responded, “A republic, if you can keep it."
​
©Suzanne Cook Catlin,Revised 5/8/2019
Follow us on:
​Information on this website is provided for educational purposes only and as a courtesy to our members.  The content provided may be from secondary sources.  The sources are solely responsible for its contents and we provide these to our members to support their personal educational goals.   Videos and other information were selected because they represent material consistent with our founding principles.
Copyright 2022 all rights reserved