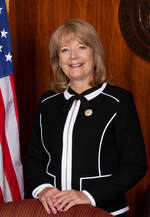 About Karen Fann
Senator Karen Fann (AZ-District 1) is a lifelong Republican, raised on conservative rural values by her hardworking parents, Jim and Sylvia Fann. She moved with her family to Prescott at the age of four.

Karen is the owner and CEO of a highway construction company specializing in the installation of guardrail and signs throughout the State of Arizona, which recently celebrated its 35th business anniversary. Her business was started in 1984 with $500 and has grown steadily to become Arizona's largest guardrail company, with 40 employees.

In addition to the guardrail company, Karen and her husband Jim owned and operated the equine facility FANN-M Ranch for nine years. The FANN-M Ranch provided services to boarded horses, produced equine competitions and worked with local 4-H clubs and other nonprofit organizations for community fundraisers.

Prior to becoming a local business owner, Karen gained four years of experience in the legal field and ten in the airport/ airline industry; she later obtained her license as an Arizona Realtor. She is a licensed contractor with the Arizona Registrar of Contractors; past president of Yavapai County Contractors Association; and past president, Prescott Chapter, of the National Association of Women in Construction.

Her dedication to community led Karen to serve on numerous committees and boards, representing Central Arizona, as well as, the Town of Chino Valley, where she was Mayor for six years. Her four years of service on the Prescott City Council included Mayor Pro Tem.

Treasurer Yee has been named one of the nation's "25 Most Influential Women in State Politics" by Congressional Quarterly's Roll Call. She is a founding member of the National Pro-Life Women's Caucus of the Susan B. Anthony List.

Prior to elected office, she worked in the administrations of two Republican governors Pete Wilson and Arnold Schwarzenegger, and former State Treasurer Dean Martin.

Kimberly Yee is a graduate of Pepperdine University where she earned degrees in English and Political Science and she holds a master's degree in Public Administration from Arizona State University.

Kimberly is married with two young children and is active in her church and community.​

​Information on this website is provided for educational purposes only and as a courtesy to our members.  The content provided may be from secondary sources.  The sources are solely responsible for its contents and we provide these to our members to support their personal educational goals.   Videos and other information were selected because they represent material consistent with our founding principles.
Copyright 2020 all rights reserved